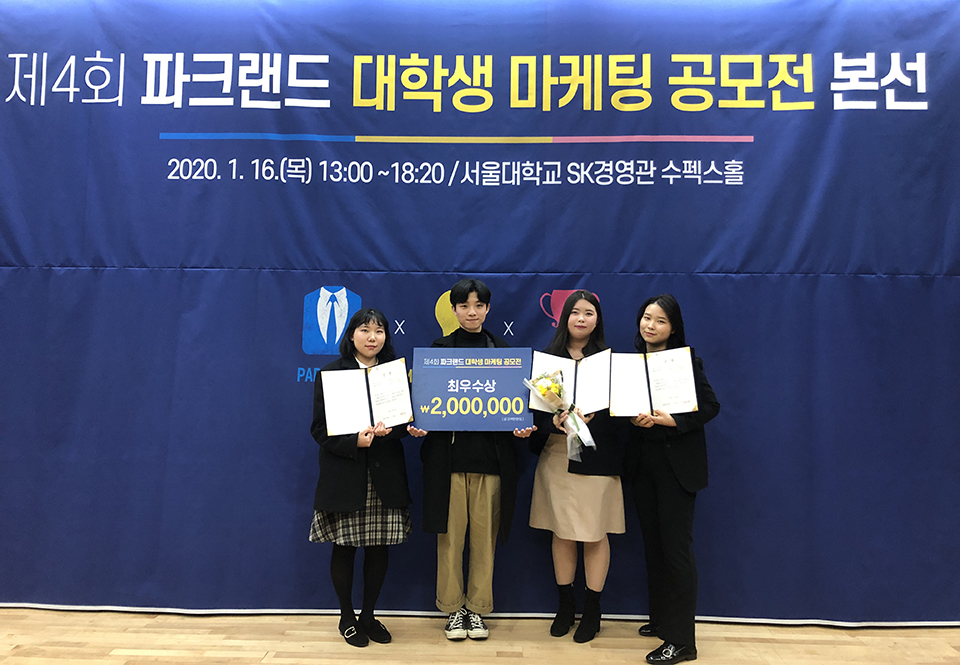 Kang Seung-woo, Jang Hee-jin, Cheon Min-ju, and Hong Yae-jin, all senior students in the DSU Department of Advertising & Public Relations, have received the Grand Prize and two million won in prize money in the fourth Parkland College Student Marketing Contest. The awards ceremony was held at the Seoul National University Business Center on January 16.
The Parkland College Student Marketing Contest is a nationwide contest for university students. The fields and themes covered in the fourth contest included Parkland Integrated Marketing Strategies, Retail, and Digital Contents. Dongseo University’s Advertising & Public Relations team’s winning entry was under the theme of “Parkland's Brand Repositioning and its IMC Strategy,” proposing a young designer project with the goal of good brand repositioning. Its aims were to give young designers the opportunity to connect makers of clothes who incorporate ethical manufacturing processes into their production with socially-conscious consumers, and to suggest appropriate marketing plans.

Reflecting on receiving the Grand Prize, Kang Sung-woo said, “Reducing one’s level of consumption has recently become a big trend in consumer culture. I have long been interested in corporate social contribution, so I looked forward to coming up with a proposal focusing on this development. I have participated in many project contests previously, but with limited success, so I am so happy to receive such a big prize before graduation. Above all, I would like to thank my fellow team members for their trust and dedication.”
LIST