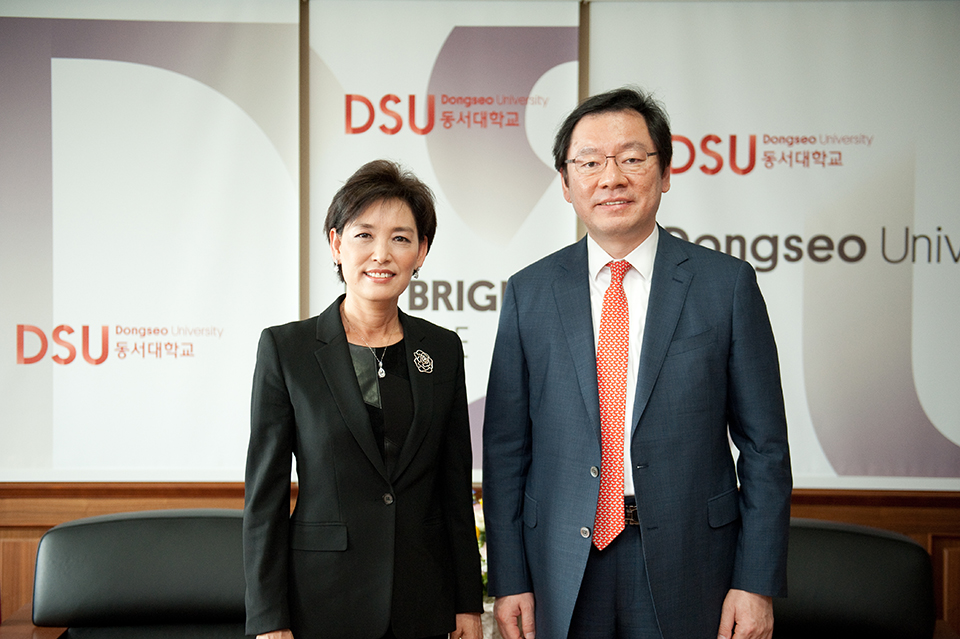 On May 17, Young Kim, a rising Korean-American political star in the United States, visited Dongseo University where she met with DSU President Jekuk Chang. Together they discussed educational exchanges between South Korea and the United States generally, and opportunities in the United States for Dongseo University students in particular.
Mrs. Kim, who was born in Incheon in 1962, served as a Republican member of the California State Assembly from Orange County. She ran for the U.S. House of Representatives in November of last year, but lost by 1.6 percent of the vote, vowing to run again in 2020. With the enthusiastic support she has received from the California Republican party, she believes her chances of victory in 2020 will be excellent.
After meeting with President Chang, Mrs. Kim gave a special lecture at the Minseok Library under the theme "Success to Failure, Failure to Success.” The lecture was attended by many DSU students, including students from the Dongseo Honor Society and the Dongseo Global English Program.
The following is a summary of Young Kim's special lecture
Success to failure, failure to success. Failure and success cannot be separated from each other. Whether the decisions you have made in your life so far were voluntary or compelled, you were successful when you made the right decisions, and you were unsuccessful when you made the wrong decisions. Our lives repeat success and failure over and over again. Success is not the end of the journey, and neither is failure. We live in a constant chain of big and small successes and failures.
Korea is a resilient country. I am very proud to see that it has overcome the difficult times of the war and developed a great reputation all over the world. I think that was possible because Korea did not accept failure as final. We were not frustrated. We were persistent. In the United States also, the Korean community suffered great hardship, as in the April 29, 1992 riots in Los Angeles. There too, Koreans persisted and eventually thrived again in a short period of time. I think Koreans are people who live lives of success and failure.
Koreans are resilient people. Even when they fall, they always get up again. I recently lost an election, but eventually I got up again. I want you to live your life doing the best you can, knowing that there are always ups and downs, and that you when you fall you must always get back up so that you may eventually embrace the successes ahead.
LIST